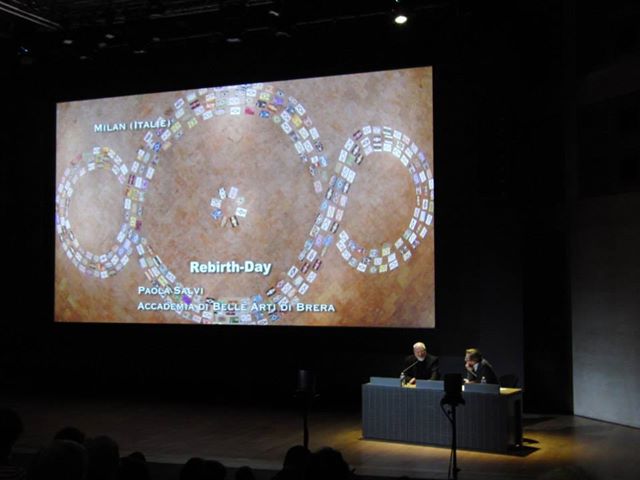 The artist Cristina Cocco is present with the video “evolution” 2008 at the international initiative of the “Rebirth-day” by Michelangelo Pistoletto, as part of NaturArti, created at the Ethnographic Museum of Cortina d’Ampezzo (curated by Chiara Costa and Stefania Zardini Lacedelli.) Included in the DVD attached to the Pistoletto exhibition at the Louvre, “Année 1, le Paradis sur Terre”, and presented at the Louvre auditorium on the occasion of Rebirth-day: the first universal day of rebirth. In the “evolution” work, the artist places the life cycle of transformation and rebirth at the center of her artistic expression. Through a magnifying glass, the video explores the micro-world that animates the pond: a liquid film that separates a celestial world, made of light and vibrations, from an underground, dark, dense world, where life and death meet . A hermetic, motionless space that has an obverse and a reverse in which she alternates her repertoire of images. The work returns what the lens caught, fixed for a long time on the surface of the pond. Without any manipulation, the recorded images tell the enchantment of the mystery of life, captured in the most pregnant and secret truth: that, in fact, of its evolution.

Preview of the DVD dedicated to Rebirth-day, published together with the catalog of the exhibition “Année 1, le paradis sur terre”

The Third Paradise: vision and anticipation

The idea of the Third Paradise – in a secular meaning that refers to the meaning of “protected garden” the word has in ancient Persian -, a harmonious union of nature and technique, is one of the strengths of Michelangelo Pistoletto’s work . On 21 December 2012, the artist activated, in this perspective, his project entitled Rebirth Day. From the principle of “participation”, which appeared in his work of the 1960s, to the “unlimited responsibility of the artist” that he defends today with a large-scale activism, the debate will revolve around the film made by selecting and editing the videos that testify to the more than 90 events made all over the world on 21.12.2012.

Twenty One: the Day the World Didn’t End.