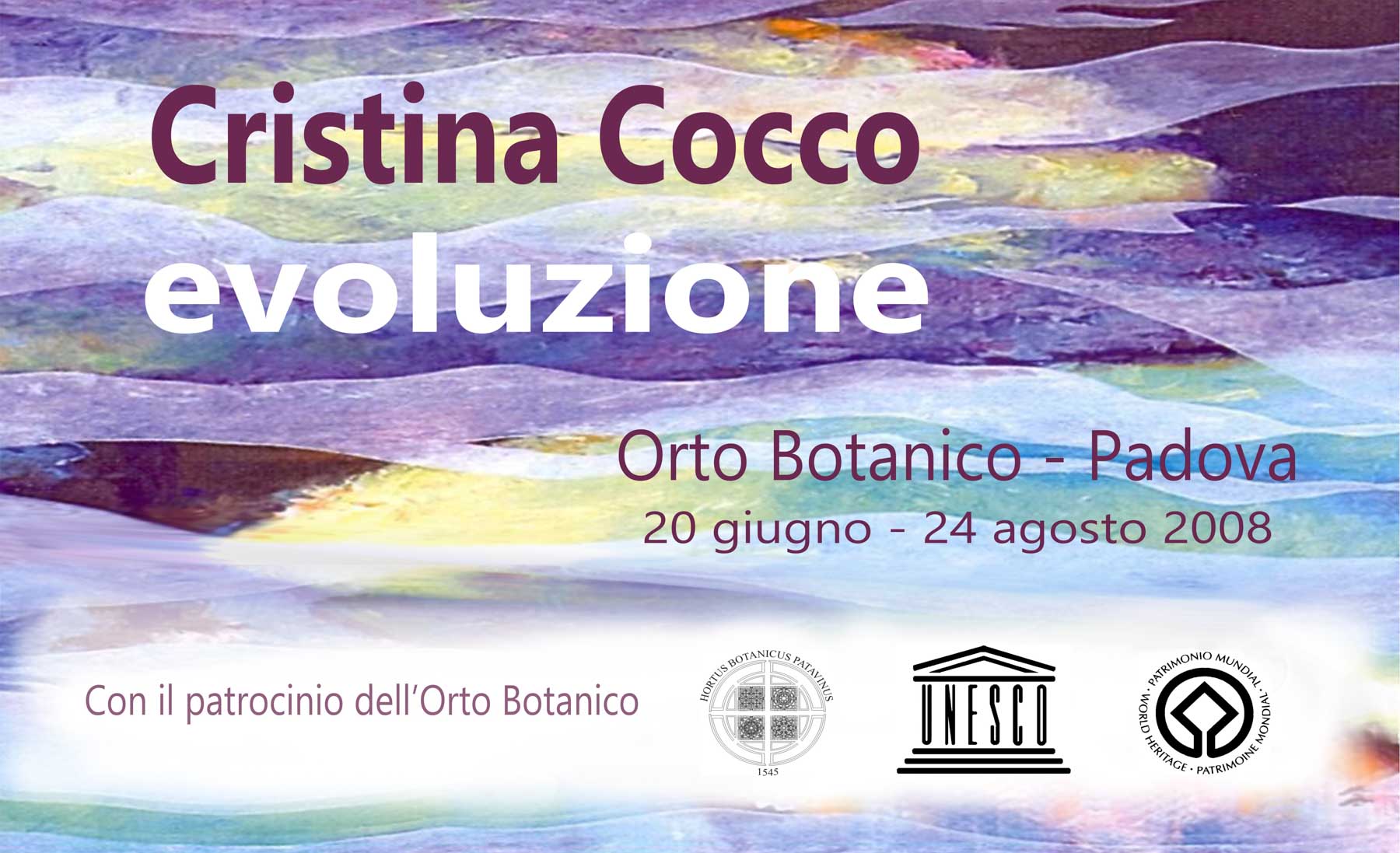 Botanical Garden of the University Padua 2008

The realism of the dynamic invisible 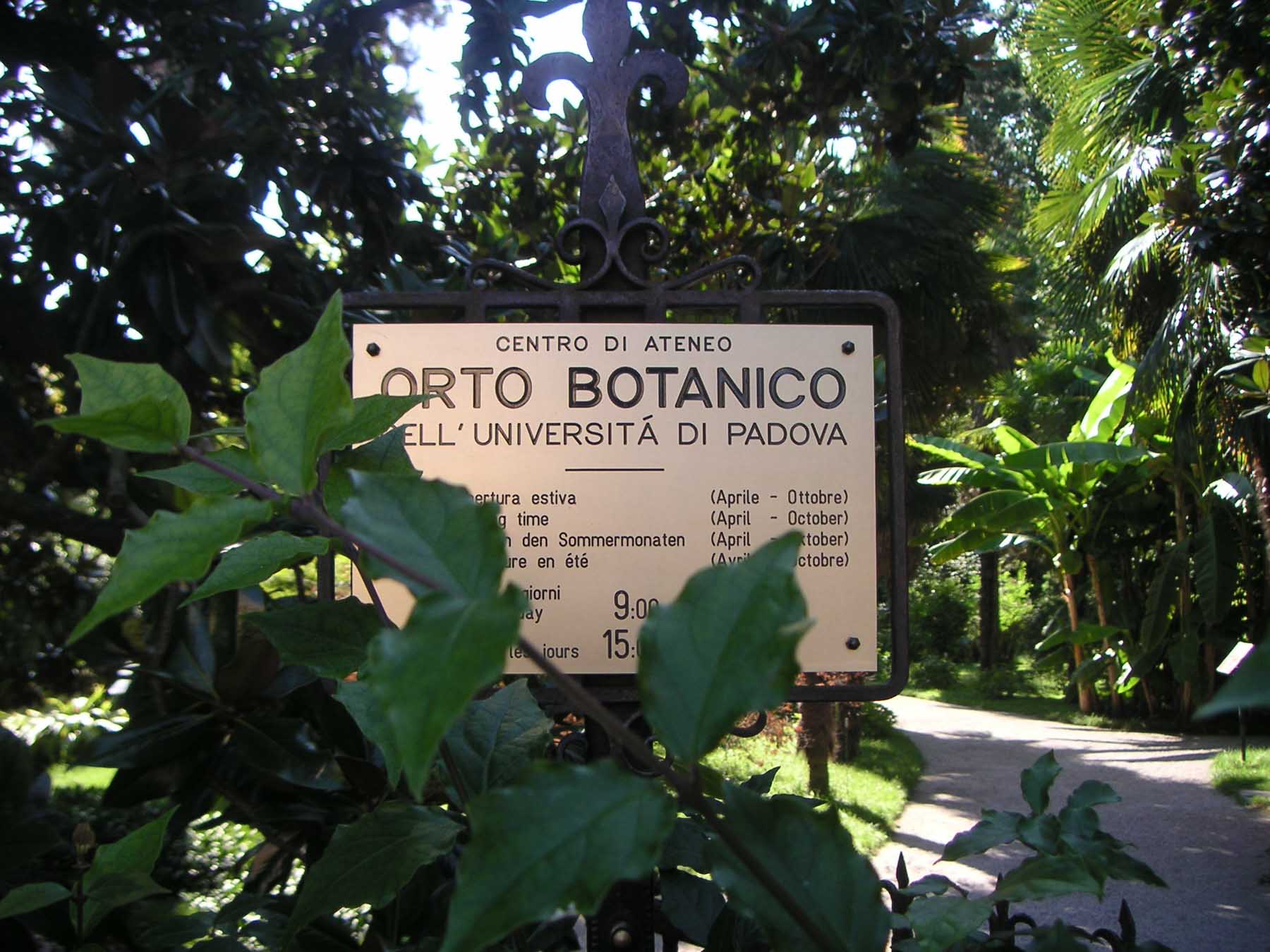 Cristina Cocco’s installation in the spaces of the Botanical Garden of Padua appears as a finished work: thought and painting become one because the intention is strong to produce a realism of the invisible biologist through the modifications of the visual form.

Cristina Cocco’s installation in the Botanical Garden of Padua presents itself as an accomplished work, a masterpiece of synthesis of the artist’s inner journey. It stands as a summa of reflexions and processes in which the theme of the natural course of life and the perception of time play a central part. These themes are conveyed through a pictorial style that is able to capture and restore, with its own personal means, the mystery of evolution. The inception moment, born out of the direct observation of the water lilies in the pond, encompasses the double symbolic value of the beauty of the form and the anticipation of its decline and decay. In the history of painting, it was the consuming, mesmerising power of the aspect, form, colour, substance and aquatic setting of the water lilies that guided Monet’s veiled and yet visionary eyes when he immortalized their beauty. Thus, the Informal enters the matter blurring the confines between art and nature.

Against the backdrop of this tradition, ideally set on the edge of the pond, Cristina Cocco fixes the confines of her own poetics, which does not content itself, however, with a mere intuition and vision. The great challenge she poses is to re-enact the process on the canvas and this is the reason why she sets the painting on the rustling certainty of the drawing. Evolution is not rooted romantically in chaos, and dissolution and germination do not have an undefined function. A precise drawing, the blueprint of an underlying regulating law, governs the incipit of the evolution, which takes its cue from the outer shell of the figure and then develops its own movement tuning into frequencies of re-birth.

The sides of the great cube become screens for the representation of the salient phases of the transformation. The painting process follows the natural flow of the transformation flux and becomes both a medium and a metaphor of the phenomena occurring in the artist’s mind’s eye as well as in the water of the pond. Therefore, the colours and the coats of paint tend to represent the phases of evolution. What is embedded in this comparison is the creative alliance between the pictorial matter and the conceptual investment. Thought and painting process become one and the same thing due to the underlying irresistible desire to produce a realism of the dynamic invisible through changes operated on the form.

The first panel is, therefore, a disembodied narration, a descriptive virtuality. The result is a concatenation of swift and dynamic signs, as if the surface were vacillating, the movement pounding, the waves pushing, the colour pressing against the edges. It is the memory of a remote state, the gigantic still frame of a bygone wonder, dried in the ashes of appearance.
The next frame is marked by the irruption of colour, the chromatic pulsations gain momentum and intensity. The outcome of this visual and chromatic flooding, which changes tone and augments the speeding dissolution, hints at the great contemporary master Gerhard Richter.
Cristina Cocco’s swift brush strokes push the limits of the palette and manage to amplify the colours in the precise moment when they are sliding into abstraction. These are the mysteries of a young artist’s talent, who not long ago was used to painting outstanding naturalist portraits in her phase of full conceptual mannerism.

In the third panel, the colours break in through a wave-like motion, standing as vectors of dynamism, and the scene is characterised by the flow of horizontal brush strokes, ribbon-like, shimmering sinuous discharges of colour. They remind of Boccioni’s “states of mind”: bundles of sinuous signs that flow with a forward movement pressing against the edges of the frame. It is the manifest expression of energy that captures and dissolves the form of the figures in its unstoppable flow. Ms Cocco’s brush stokes, with their horizontal flow, run sinuously generating a modulation in the layers of light and in the colour bands. And here comes the fourth stage: the final dissolution, the vaporization of the pictorial substance, the ethereal disintegration.

In this final stage, Ms Cocco combines certain traits of analytical painting, the painting which is so self-conscious that it only allows itself to be governed by Time, the inspirer of textures and layers of colour. The variation in the density, the blurring strokes, the thin grains that nebulize the light and shade seem to reveal more of a romantic than an analytical mood. It is, admittedly, a contradiction. Yet, in Ms Cocco’s work, these opposites touch creating a short circuit which keeps the viewer suspended between a state of immersion and one of detachment.

Inside the cube there is the objective truth: the real time, the fixed camera, the footage of life and its processes of transformation in the water of the pond. It is a masterpiece of creation, told without deception through the lens opened on the screen of the pond. What unfolds in one’s mind’s eye is this film, like a strip, like the canvases that surround the cube, like the sings of transformation and the natural course of life. 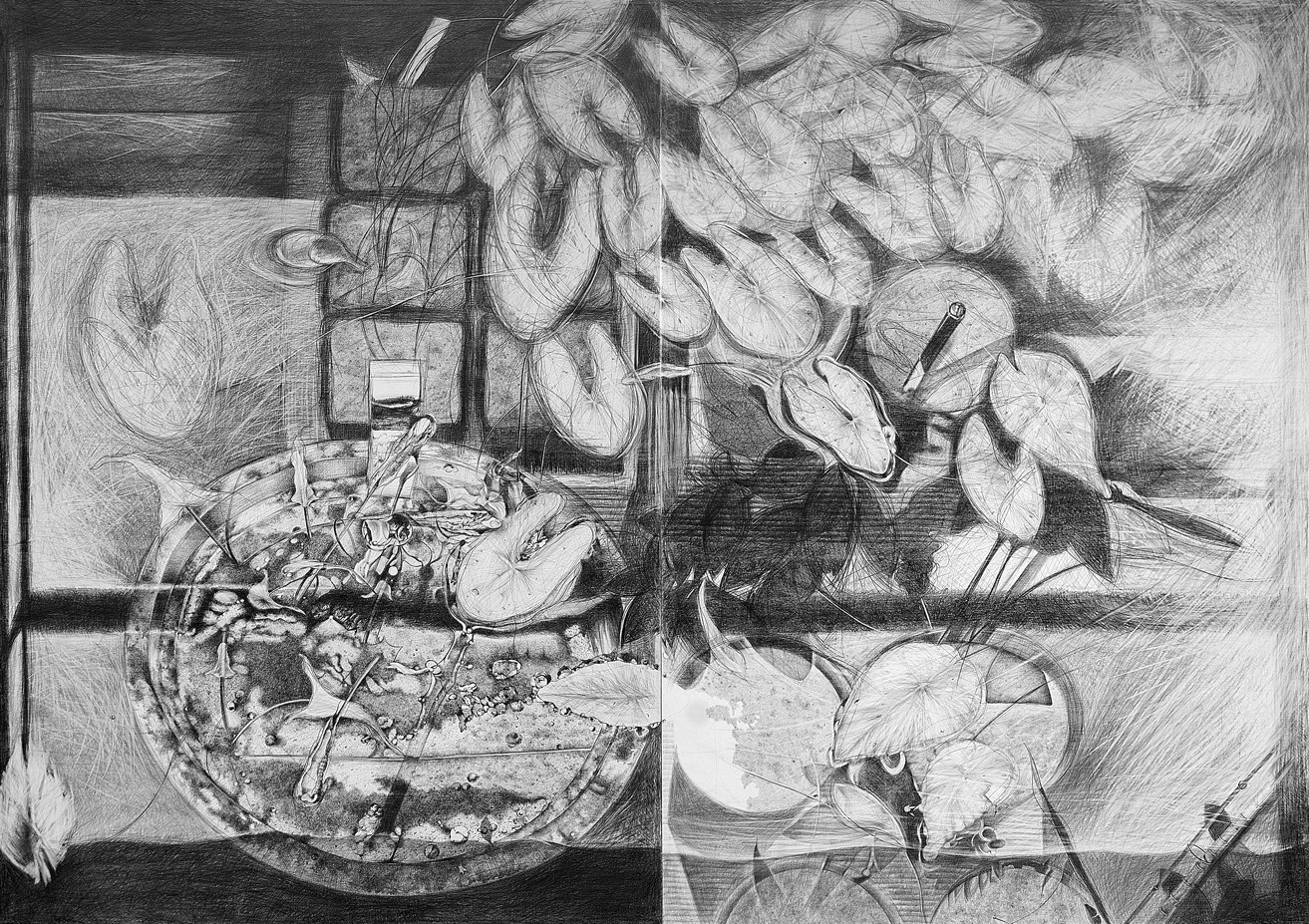 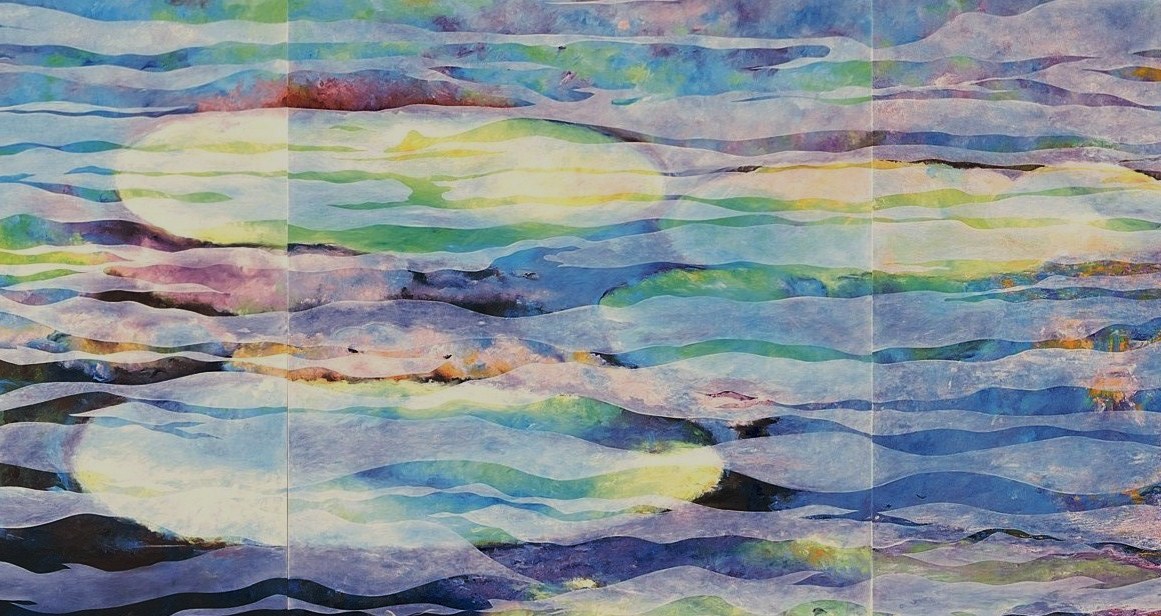 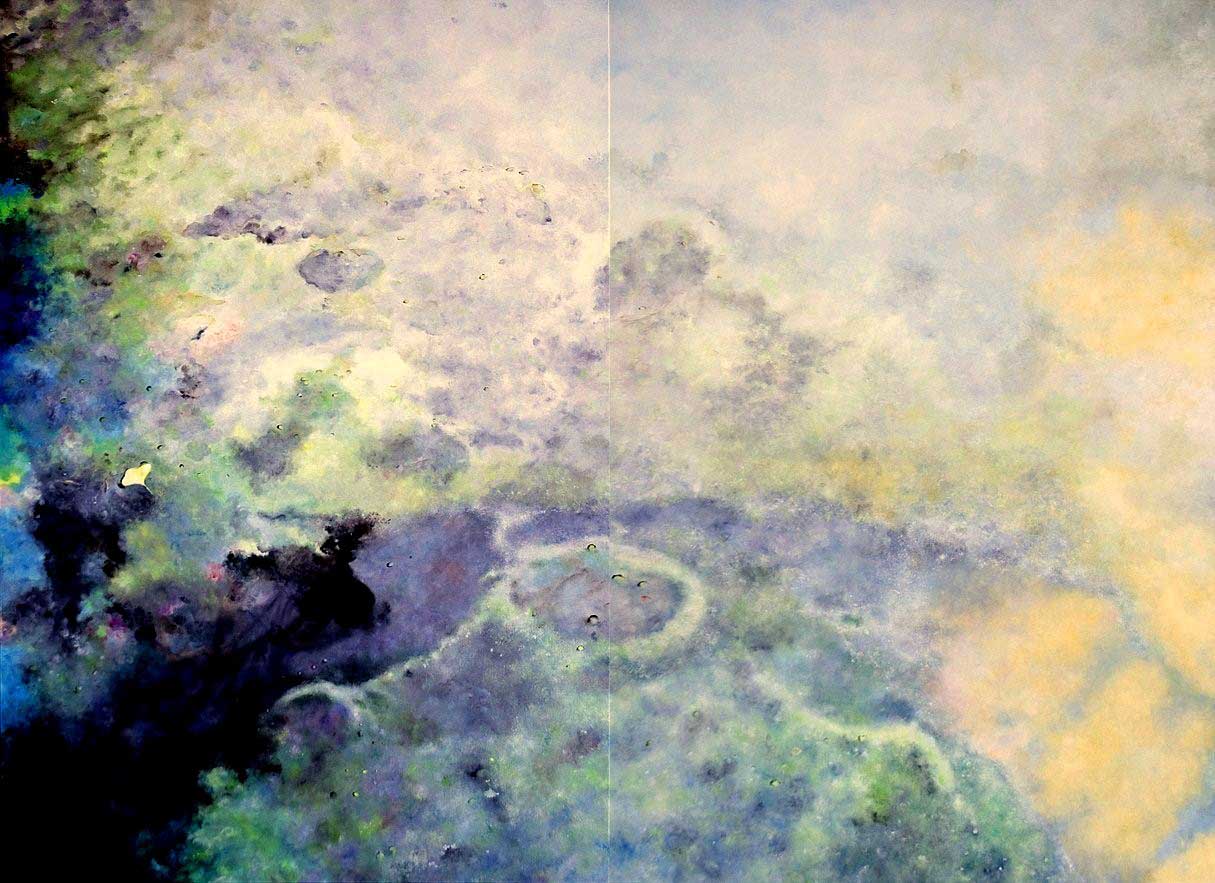 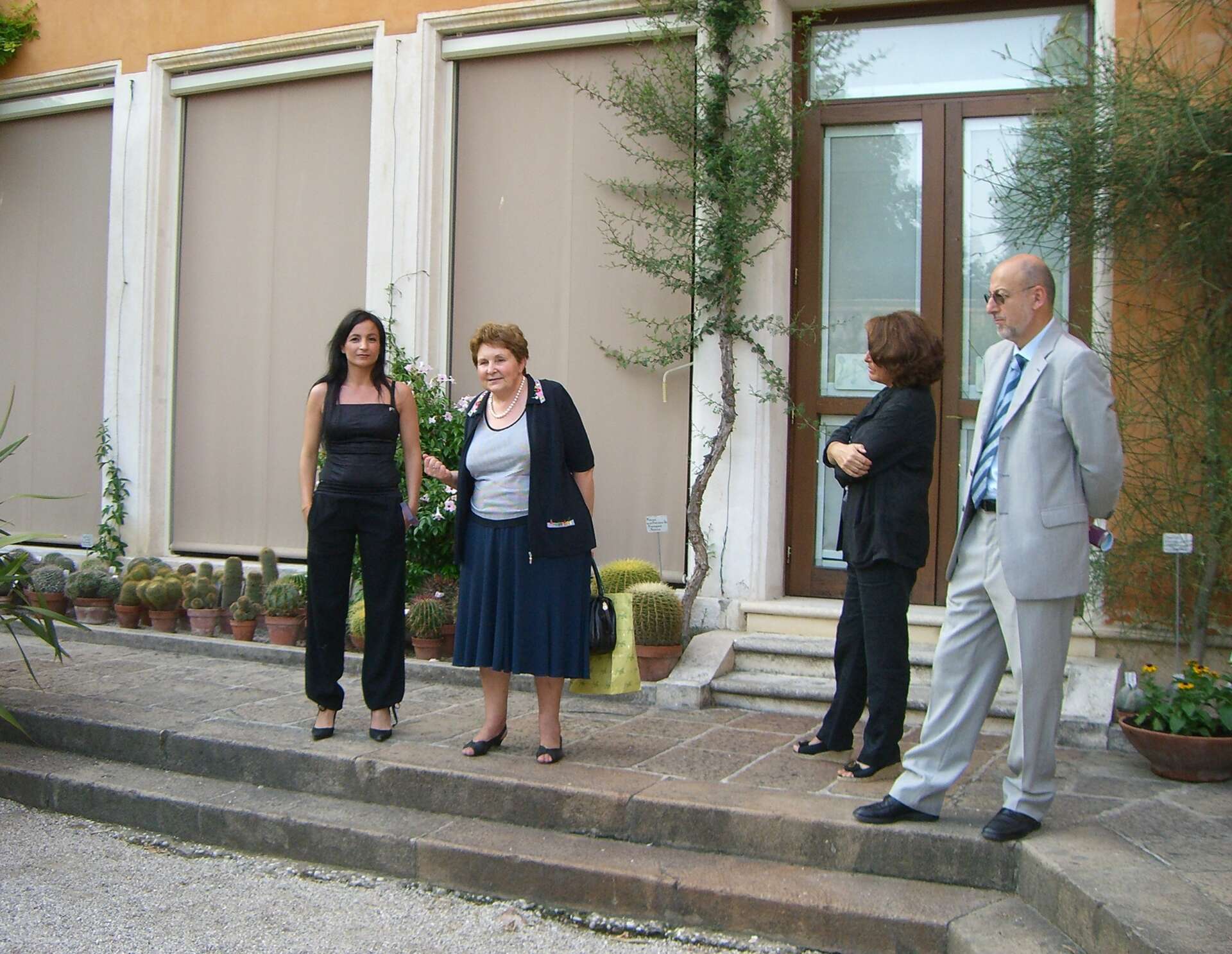 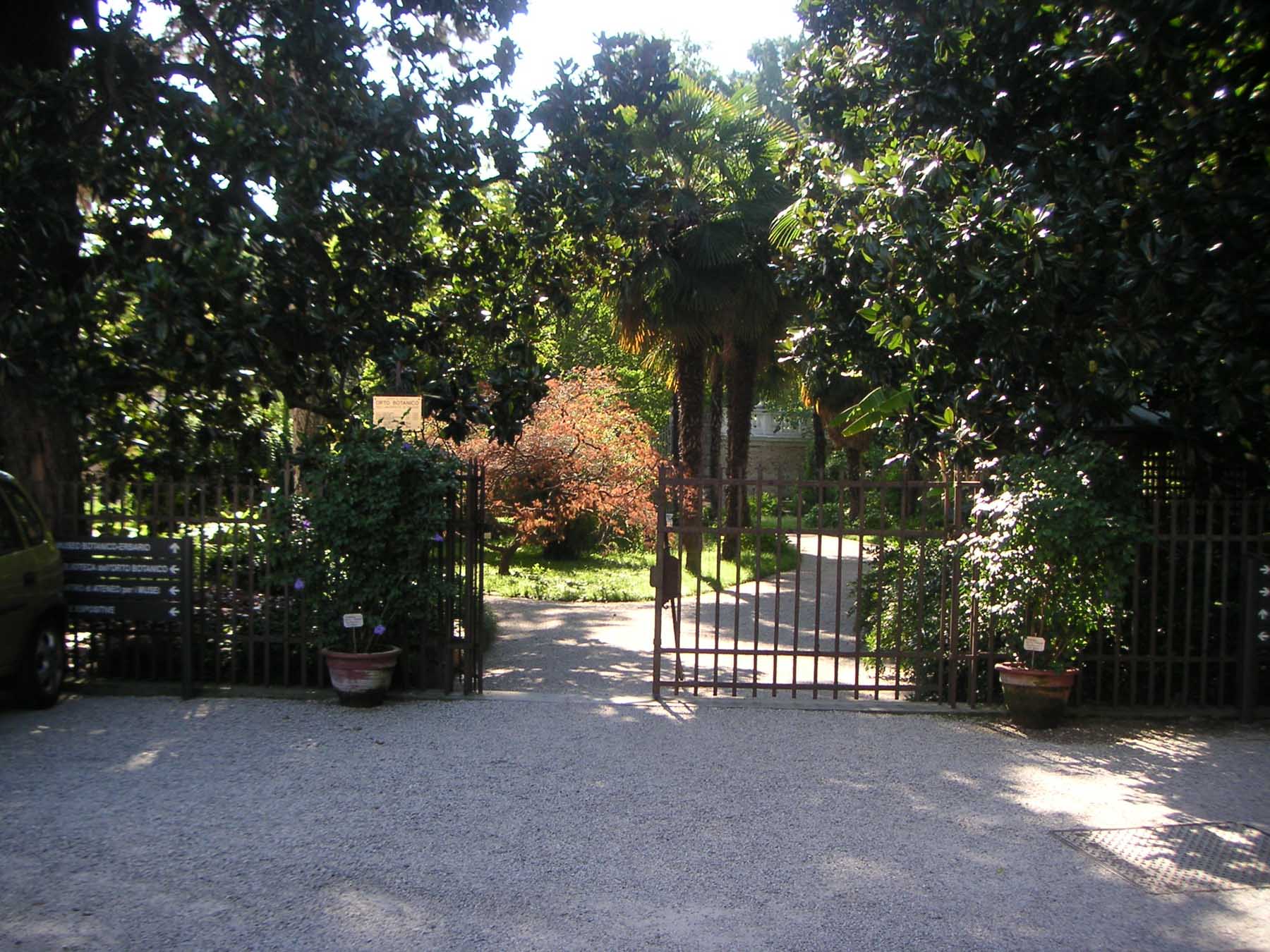